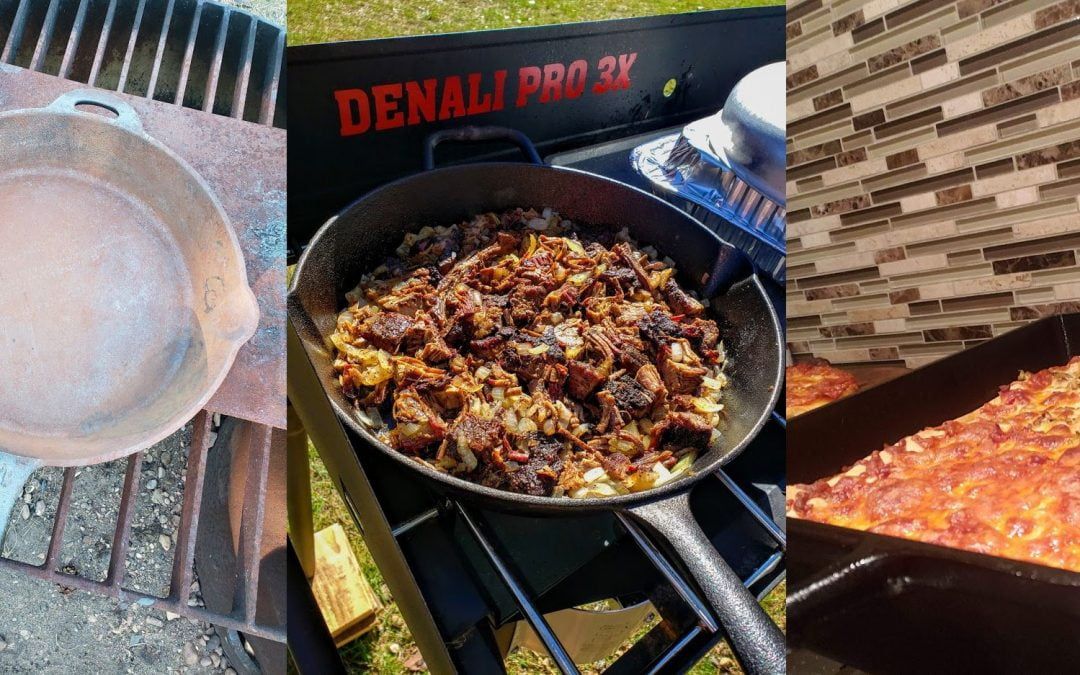 When it comes to cookware, nothing lasts longer for the price and cooks better than cast iron. This heavy weight metal has been used for hundreds of years as a resilient and inexpensive way to make a pot or pan. With the right care and maintenance, cast iron pans can last for generations and are nonstick with the right seasoning. The most common forms of cast iron are Dutch ovens, skillets, frying pans and pots. Cast iron pots are very popular for using to cook in an oven or on a barbecue because of their fantastic heat retention, durability, and relatively low cost (compared to Carbon Steel pans).

One of the top selling features of cast iron cookware is its ability to retain heat. Many cooks will preheat their cast iron pans in an oven or on the BBQ before they start to cook on them. This is an important step, because cast iron can take a long time to get hot and if you put it directly onto a heat source, it can develop hot spots, it is best to heat it slowly and with air flow instead of directly on a fire to have a more evenly hot cooking surface. You do need to use caution when cooking with cast iron because the handles of the pots and pans can stay hot for a long time after cooking, so always grab the handle with a barbecue glove, a dry tea towel or a potholder, even if you think it might not be hot.

Most Cast Iron pans come pre-seasoned right from the store, I know all of the cast iron we sell here does. Because of this, it is really easy to get started with a cast iron pan. Damaging the seasoning is surprisingly difficult and if it does happen, it is relatively easy to fix! I nest my pans in my cupboard and have never had this action damage the seasoning of my pans.

How to Season a Cast Iron Pan

Cast iron can maintain a fantastic non-stick surface if you maintain it properly. This means a light coating of oil that is applied to a hot pan and allowed to cool or applied to a cold pan and is heated up slowly and allowed to set onto the pan. Contrary to popular belief, you can use soap to clean a cast iron pan, you just want to avoid scrubbing the pan and removing all the seasoning. Seasoning is not a thin layer of oil in the pan, it is a layer of Polymerized oil, which means the oil has been broken down into a plastic like coating on the pan that will not react to the soap the same way oil normally would. If you do scrub a little too hard an take off the seasoning, it’s not the end of the world; just apply a coat of canola oil or beef tallow or any other cooking oil to the pan, rub it around with a paper towel and throw the pan into the oven at 400 degrees for 30 minutes, then turn the oven off and leave the pan in there until it gets cold. You can repeat this process a couple of times, but I have usually had pretty good results after just 1 coat.

What Can You Cook in a Cast Iron Pan?

Cast Iron is best used for searing, baking, deep frying, boiling, braising, frying and pan roasting. Because of this level of versatility, it can be used to make everything from soup, pizza, steak, pit beans, chili, burgers, fish, bacon, eggs, hash browns, pancakes, French toast, paninis, cornbread, and fried chicken right through to stew, smash burgers and stew. The only thing we really recommend against cooking on cast iron is grilled food, cast iron grills tend to get scrubbed down more often than they should or get hotter than they should, and it ruins the seasoning, so they end up just rusting out and the food sticks to them, for this purpose we recommend enamel coating grates, not cast iron.

Where Can You Cook With a Cast Iron Pan?

Cast iron pans are very versatile, they can be used almost anywhere. Whether you have an induction range, an electric range, a natural gas range or oven a pellet grills a charcoal grill, a campfire, or an offset cooker; all of these can be used to cook on a cast iron pot. There is nothing more satisfying than seeing cast iron sizzling breakfast over a campfire or seeing the crust of a freshly made pizza coming off the barbecue from a cast iron pizza stone.

What is the Difference Between Vintage Cast Iron and New Cast Iron?

You are walking through a yard sale and you spot an old piece of beautifully rusted cast iron and you think to yourself, that would be a fun reclamation project! You are correct, bringing old cast iron back to life is a lot of fun and you can get a great pan with surprisingly little effort. Vintage cast iron and new cast iron were not necessarily made the same way. Modern molding techniques tend to give the cast iron a less polished look and a little more grain, so some collectors prefer the vintage cast irons. In recent times some manufacturers like Lodge and Finex have started to make very high end cast iron that can be vintage for your great great great grandkids, if you can afford it.

What are the Best Cast Iron and Accessories Available at You Need a BBQ?